11 Reasons why MuckMat Are Awesome! 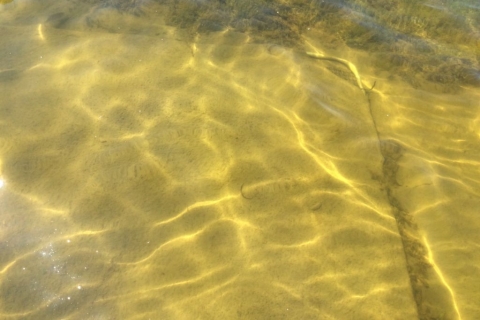 MuckMat solves problems for lakefront owners like you. Now, you can walk on your lake bottom without sinking in muck ever again… REALLY! Here is why MuckMats are super awesome…

It works now, not months or weeks from now. Walk on MuckMat as soon as it’s installed.

You can get a beach in 30 minutes. That’s all it takes to assemble and install a MuckMat — 30-minutes! The rigid frame fits in pockets sewn into the fabric. Frame pieces connect by simply slipping one end into the next.

MuckMat Leave stays on your lake bottom. The steel frame holds it down. It doesn’t move or drift.

4. You swimming area will be weed free — Guaranteed!

Chemicals don’t work on muck. Even with no weeds, you’d still sink. Many people don’t want toxic chemicals in their lake. And if you’ve tried them, you’ve seen firsthand. They don’t control all your weeds.

Guaranteed by Goodbye to Muck & Weeds, Inc. They always work. We guarantee all materials for five years.

The aluminum frame lasts at least 50 years. Steel rusts slower underwater. Air is 21% oxygen — water is 1%. The fabric lasts as long as the steel, (In certain conditions, the fabric much longer).The MuckMat lasts a long time.

Our fabric and grids are designed to hold sand and gravel (in road construction). Adding sand firms it up even more.

9. Clean your MuckMat right in the lake

It’s easy, you might even enjoy it. You need to clean off silt, or weeds will eventually be able to grow. Use a push broom, a lake rake (upside down) — or a squeegee! Sweep it (just like you would any floor) right on the lake bottom. How often you clean it is up to you — a couple times a year should do.

10. Costs less than a dock section, or a season of chemicals

And a MuckMat will last a lot longer. The cost of a MuckMat over 10 years works out to about the cost of dinner for two, once a year — and MuckMats have zero calories.

Leave it in the lake! Ice won’t bother it and yes — MuckMat will be there in the spring. The only reason to take it out is if you have to. Which brings up “permits.”

Do you need a permit?

In most states, “seasonal” like roll-in docks and swim rafts require no permit. Some states require permits for “permanent” structures like fixed docks and seawalls. A MuckMat can be either “seasonal” or “permanent.” If it’s installed in spring and taken out in the fall — it’s “seasonal.” Adding sand makes it “permanent.” States that allow sanding, also allow (or require) soil barriers to preserve sand — and MuckMat is the best “soil barrier” there is! If you’re not sure, you can check with the regulating agency in your state or province.