Everything you need to know about Muck in Lakes 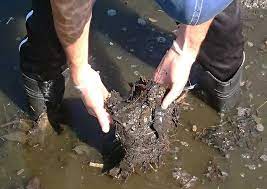 A long, long time ago, three billion years, (give or take a billion) there were vast mountain ranges pushing up all over the planet, portions of the Earth’s crust that were thrust thousands of feet into the sky. Meanwhile, countless volcanos spewed out molten lava, which became the base for the continent you now call home. (Before we continue... If you’re someone who believes the Earth is only about 8,000 years old, humor me please. Pretend that science is a real thing for a little while. Thanks). Once mountains formed, they didn’t have much to do, (no ski resorts yet, or oxygen for that matter) so they started “weathering.” Little tiny pieces wore off over time. If you recall from your high school geology class, igneous, metamorphic and sedimentary rock, all break down, eventually forming soil particles. Wind, rain, freezing, thawing, friction, cracking and other physical, chemical and biological effects break down rock over millions of years into stuff we call clay, silt, sand, and gravel. Soil particles are simply small pieces of rocks, that used to be mountains. Soils, like sand for instance, can be made up of different minerals. Ever notice the sand on Lake Michigan looks different than the sand on South Beach, which looks different than the sand at Punta Cana? It’s all sand, just made up of combinations of different kinds of teeny tiny rocks. Terms for these tiny rocks actually refer to their size, not what they’re made of. Silt and clay particles are the smallest, sand is next and gravel is the largest. Frankly, I don’t know why soil geologists classify gravel as soil, but they do. So, these particles consist of just five elements: (Quoting a Wikipedia entry, from a total geo-geek)* “The minerals of soils are predominantly formed by atoms of oxygen, silicon, hydrogen, and aluminum... These elements along with calcium, sodium, potassium, magnesium, and carbon constitute over 99 per cent of the solid mass of soils.”

Over eons of time, wind, water, and glaciers move these soil particles around. If they end up in your yard, you plant some grass, mow it, get out the bocci ball set and you’re good to go. But if the particles keep moving, (a process called “transport”) they eventually find their way to water. Because sand and gravel are heavier, they sink close to shore. But silt and clay, being lighter, travel out deeper before they settle. This is why the lake bottom feels firmer close to shore, but the further out, the softer the soil gets. Once we decide the lake bottom is too soft, we proclaim it...MUCK! Remember, every second of every day, soil particles blow and flow into your lake. These particles mix with organic materials, like decaying plants and fish poop, for example, making a nice place for weeds to grow.

Back in your yard, there are reasons you soil hangs tough for the bocci ball** tournament. “Friction” and “Interlocking” as the names imply, mean the soil particles stick to or lock into one another. If they can’t slide easily, or they lock up because of their rough, microscopic, sides, they can bear more weight. The more they hang together, the more strength they have, which means your soil has more “bearing load capacity.” Out in your beachfront, sunk up to your knees, your lake bottom soil doesn’t have much bearing load capacity. Effectively, it has “zero bearing load.” You call it, “Yucky muck” or something much worse... But your “yucky muck” isn’t much different than the soil in your yard, with one big exception: it’s continuously submerged in water. Guess what that does to the “friction” and “interlocking” properties that hold your yard up? Yup, that’s right. It’s like spraying WD-40 on a sticky door hinge. The soil particles slip and slide off one another, the soil’s bearing load drops to nothing and you’re stuck in the muck. Bummer... Before we move on to how to effectively deal with your muck problem, take time to give your muck its due. All those countless particles laying on your lake bottom right now were once parts of giant, majestic mountain ranges that dwarfed the Rockies in height and every other measure. So be proud of your muck, it has a very long and noble history.

Next...I’ll explain (see How a BoatLift-Mat Works) how we can use the innate properties of muck, to make a super solid lake bottom. (Dear geo-geeks, I know my explanation isn’t nearly as detailed as yours would be. But I’m trying to explain this in a way that non-geo-geek, normal people will find mildly interesting. If you can do better, email me your version. I’ll be glad to post it on the website). * Bocci Ball was originally meant to be played on sand but has evolved into a lawn sport, usually involving a cold drink in one hand and a bocci ball in the other.

No, you can't have bugs come and eat up all your muck. The bacteria you've heard of, or perhaps purchased, only eats organic stuff, like leaves that blew into your lake or decaying lake weeds. Most of your "muck" is just dirt. What eats dirt? Nothing eats dirt, because it's just... dirt! Your muck is mostly small clay and sand particles with no nutritional value. What's more, whatever the bacteria do eat, they absorb the nutrients and then poop out what can't be digested. The bacteria (you already have trillions of them in your lake, by the way) release gases from their digestive process. They also expel a little solid waste. And guess what? This bug poop adds to your muck. Only about two or three inches of your muck (which could be several feet deep) is organic food for bugs, the rest of it is inert, yucky, mucky soil. Does this make sense to you? Goodness Sakes! No, you can't just dump sand on your muck to cover it up and no, your sand doesn't wash away to the neighbor's place, (okay, maybe a little washes over to your neighbor's). But mostly what happens to your sand is, it sinks in the muck. Your lovely new beach sand consists of particles that are heavier than the soil particles that make up your muck.

So here's a question for you: if you put something heavier and something lighter in water, what will happen?

Yes, you are correct, the heavier thing sinks lower, displacing the lighter thing which rises up. Your sand drops, your mucks comes up over the sand and you've just wasted your time and money. The answer, of course, is to put a MuckMat, or an original MuckMat, or a Super SandMat over the yucky soil, organic stuff and bug poop. You won't sink in the muck anymore, you won't have lake weeds and if you're putting in the sand, our Mats will hold your sand up, providing a barrier to the yucky, soft soil underneath.

Muck and the age of lakes

Bodies of water, like all living things, go through an aging process. In lakes, this aging process is known as “eutrophication,” it means aging.

Over several thousands of years, shorelines of oligotrophic lakes erode and become less steep. The rocks on the lake bottom grind against each other creating sand, while more plant life emerges on the shore and in the water. The lake reaches middle age. Traits of young lakes are: * Steep shorelines going down to the water’s edge. * Primarily conifer trees (pines) along the shore. * They are deep and drop off quickly. * The bottom is mostly rocky. * The water is very clear. * They have very few aquatic weeds. * They have high oxygen concentration. * They are populated with cold water fish such as trout, steelhead, whitefish and salmon. * Example: Lake Superior

After several thousand more years, mesotrophic lakes gain nutrients from the fallen, decayed leaves from deciduous trees, decayed shoreline plants, decaying aquatic plants, and the remains of fish and other water creatures. The lake bottom near the shore becomes covered with silt and sediment. The lake has become an old lake. Traits include: * Less steep shorelines. * A mixture of conifer and deciduous trees, such as oak, maple and ash. * The bottom is mostly sand, resulting from erosion and weathering of rocks. * There are a few aquatic weeds and more plants growing on the shoreline. * They are less deep on average, than oligotrophic lakes. * The water is still very clear. * They support both cold and warmer water fish, such as bass, perch and bluegill. * Example: Lake Michigan

It is the nature of all lakes to fill themselves in and become land. After several thousand more years, your lake will continue become shallower in the center, more shoreline will erode into the water, trees will fall in, leaves, dust and dirt will blow in, weeds will become thicker and grow out farther into the lake, die, decay and add to the bottom. Traits include: * Gentle, mostly flat shorelines. * Mostly deciduous trees along the shore and an abundance of shoreline plants. * Are usually quite shallow compared with sandy or rocky bottom lakes. * Very little oxygen in waters deeper than 30 feet. * The water is murky or “stained” from organic material and single cell planktonic algae. * Heavy aquatic weed growth. * Few, if any cold water fish. But bass, panfish, pike and carp thrive in old lakes. * Example: Probably your inland lake, or you wouldn’t be reading this.