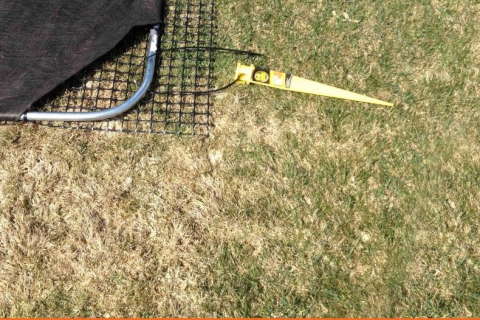 When you get your LakeMat, it will come with a set of high quality plastic stakes. These stakes will help you to secure your LakeMat to your lake bottom so that it doesn’t move around and stays right where you want it. Initially when we began making LakeMats, they were used in calm, small inland lakes and were installed early in the season before seaweed growth. So, since there was almost no water movement under the surface and because they were installed early, they tended to stay in place without stakes.

Since that time, our customer base has expanded from Canada all the way to Florida. These customers were using them in large bodies of water with a lot of boats, which was causing them to move around. Our customers were also installing them during the summer when there was a lot of weed growth. When the weeds died, they released gas which would actually lift up their LakeMat!

Through experimentation that included increasing the weight (this made them too cumbersome) to adding ports that gas could get through (these still allowed the mats to move in turbulent water), we determined the answer was plastic stakes attached to the edges of the LakeMat. These stakes are pushed into the lake bottom and hold the mat securely in place.

Your LakeMat comes with grommets at five foot intervals along the edge of the mat. If you put your LakeMat in early on a small lake, you may not need the stakes, though we recommend you at least using the corners. Our twenty foot version includes twelve stakes, while our thirty foot version comes with sixteen stakes.

Your LakeMat will come with instructions for proper installation of your mat.