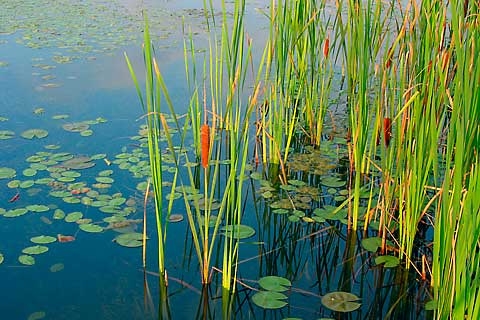 I’ve read so much wrong stuff, it’s hard to know where to start. Goodness Sakes!

First, raking, cutting and pulling lake weeds creates more lake weeds. The people who rake the most have the most weeds — and so do their neighbors on either side. That’s because most lake weeds can reproduce by “fragmentation.” This means if you break off a piece of the plant, it will sink to the bottom and start a new plant. Ever notice how many thousands of little pieces of weeds are floating around after you rake? They’re a bunch of new lake weeds just a-lookin’ for a place to sprout.

I’ve also read a lot about people applying their own herbicides. Here’s a tip: If you’re not licensed, don’t do it. You’ll screw it up, by either not using enough so it doesn’t work, or by using too much creating a highly toxic environment for everything that lives in the water. But that’s not the worst part about using chemicals… this is.

Ask anyone licensed to apply herbicides in lakes what percentage of the weeds they treat actually die? They will tell you about the best they can do is 85%. You may have noticed yourself, that not all the weeds are controlled; there’s still a few left after being treated. But why?

Some weeds simply didn’t get a big enough dose to kill them. But about 5 to 10 percent of these weeds are resistant to the chemicals. So guess which weeds get to spread their seeds around for next year’s crop? Yup. And next year’s weeds will be more resistant, and the year after, and so on. So you have to use more and stronger chemicals. Eventually, despite extremely toxic doses — the weeds will keep coming.

The answer is simply deprive lake weeds of sunlight by placing a barrier over them. Any of our LakeMat, MuckMat or SandMat products will do the trick. It’s that simple: no light means no lake weeds.