MuckMat Holds up Your Dock 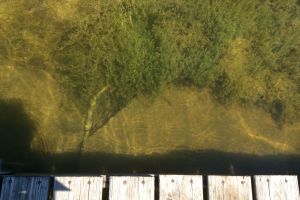 We couldn’t sink dock posts into the lake bottom, because there wasn’t really a solid “bottom” there, at least we never found it. One neighbor said he’d hit solid bottom at 24 feet, but a year later his “level” dock resembled a roller coaster more than a dock.

A dock with footplates on cement blocks worked somewhat, if you didn’t mind replacing the blocks that sank in the muck each year.

Worst of all, you couldn’t walk around the dock without sinking in muck, and then there were all those lake weeds! Yuck… my kids hated it, my wife hated it, and I really hated it.

Then I developed the MuckMat. It controlled all the weeds and held up my dock and gave me an area to walk in the water and not sink up to my thighs in muck. In this photo, you can see the MuckMat extending out about six feet beside my dock. This gives us a decent amount of space to walk and a good place to launch our kayak. (You can see the corner of the frame in the upper right).

You can also see the weed line in the top of the picture, (there’s actually another MuckMat extending out to the right of the photo).

This shows the MuckMat laying under the dock. You can see the weed line and the corner of the Mat. Notice the dock is setting near the edge of the Mat, it doesn’t have to be centered to hold up a dock.