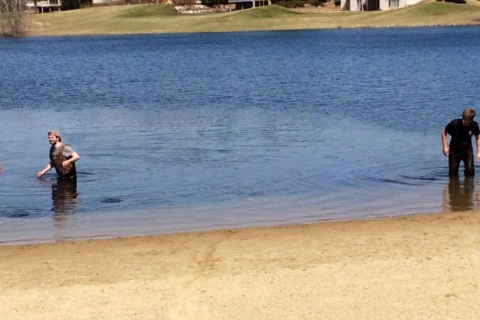 Contrary to what you may have been told, bugs and bacteria cannot be used to effectively get rid of muck because the bulk of what makes up muck is dirt/clay which is not consumable. Bugs or bacteria are only effective against organic matter like decaying weeds or leaves that have fallen into your lake. Any organic matter that is in your muck is only the top few inches, anyway.

The muck you find at your shoreline is primarily made of clay and sand and has no nutritional value. Also, the bacteria you’re introducing, don’t actually “eat” organic material, they absorb it and the evacuate what they cannot digest in the form of gas and fecal matter. Increasing bacteria in your lake actually adds to your muck!

You also cannot just put sand on top of the muck and expect it to stay (and no, it’s not because it all disperses throughout the lake). Sand is actually heavier than the muck so it just sinks into it and seems to just disappear. This heavier sand sinks and actually raises the muck up over the sand creating a huge waste of effort and money in creating a sandy beach.