Three Invasive Lake Weeds Species that can be Stopped by LakeMat 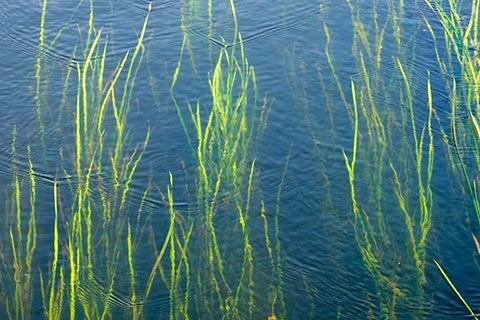 While invasive, wild celery is not an ugly plant, it prevents erosion, and is great for wildlife as they love to eat it. However, wild celery is not great for your beach and it’s incredibly difficult to get rid of. Wild celery has rhizomes, (little connector-things that spread under the soil) so even if you pull up the plants or poison them, the rhizomes are almost impossible to control and will send up new plants. The good thing is that even plants with rhizomes can’t grow without sunlight!

“Starry stonewort may be the greatest challenge that has ever faced lake management professionals and lake user groups in Michigan. The impact on Michigan fisheries could be profound,” reported the University of Michigan.

Though it responds to chemical treatment, starry stonewort grows so thick, the chemicals only burn the weeds on top. Some herbicide applicators refer to this as a “haircut treatment,” meaning they can’t get it all, just the upper portion of the mass of starry stonewort.

Placing a LakeMat on the lake bottom will prevent sunlight from reaching starry stonewort, thereby controlling it. Starry stonewort has no true root system and prefers to anchor itself in soil and will migrate with water movement until it finds a suitable spot which is not on your LakeMat.

For many different reasons, hydrilla is the most difficult invasive lake weed in the United States. Hydrilla can reproduce through fragmentation, tubers, turions, and seeds. It also grows up to one inch per day and can grow up to thirty feet long. Hydrilla can also grow with very little light. There have been several instances of benthic barriers, such as the LakeMat being used to successfully suppress the growth of hydrilla around boat docks and swimming areas.