What is the Difference Between the LakeMat and the MuckMat? 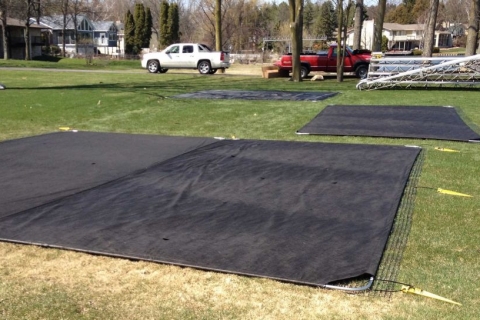 Okay, a LakeMat is a special, patented, gas-permeable fabric that is placed on your lake bottom and prevents lake weeds, (often called, “seaweed” or “aquatic weeds”) from receiving sunlight. Without sunlight, plants can’t conduct photosynthesis, so they can’t grow. Existing plants die off. That’s what a LakeMat® is and what it does.

Now, a MuckMat is a LakeMat with one extra feature. It has another special material, layered under the LakeMat® which prevents you from sinking in soft lake bottoms. This soft soil on lake bottoms is most often known as “muck.” It’s also called silt, sediment, mud and marl, even though each of these terms mean something a little different.

A LakeMat is used for controlling weeds in areas with a fairly firm bottom with up to a few inches of muck. It can also be used in areas you don’t intend to walk on much.

A MuckMat is used for controlling weeds in areas where the lake bottom is soft and you’d like to be able to walk without sinking in up to your knees or further. Yuck…

Both the MuckMat and LakeMat are environmentally friendly, no chemicals, no electricity, no raking or pulling out weeds. They can both be left in over winter or taken out of the lake, if you wish.