Where Have All the Big Fish Gone? 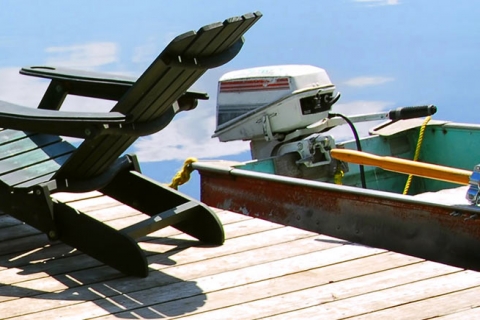 Do you have as many big trophy fish in your lake as you used to? How long has it been since you pulled your biggest largemouth or pike out of your lake?

If you fish a lake regularly treated with lake weed herbicides, you may have noticed the big ones aren’t around like they used to be.

We may have found the reason — by accident.

We started by questioning if aquatic herbicides were really safe, so we set out to find studies that answered the question. We found them and guess what? They said aquatic herbicides are safe! Then we noticed the studies were conducted (or funded) by the chemical companies that make them.

There were reports by municipalities that used aquatic herbicides and they cited the studies done by the chemical companies! So much for unbiased research.

But then, we found something more interesting.

The reports all verified that herbicides kill aquatic weeds. Here’s the problem — dead weeds don’t produce oxygen and worse — decaying weeds exert heavy demands on dissolved oxygen (DO) levels. The more weeds you kill, the less oxygen you have in the water.

One study (Owens and Maris) treated aquatic weeds with herbicides and tested the amount of DO in the area. IT DROPPED TO ZERO and remained at zero for two days!

Studies are done on how much oxygen small fish need and the answer is “not much.” They can survive on as little as 2 parts per million (PPM) of oxygen.

But here’s the question — Which needs more oxygen, big fish or little fish? Obviously the bigger the fish, the more oxygen it needs.

Guys who haul around big fish for tournaments try to keep the oxygen in their tanks at 7 to 9 PPM, to avoid stressing game fish. So, what do you think happens when the DO drops to zero? The fish would suffocate if they stayed there very long.

Why would a big fish stay where there’s not enough oxygen? Food. The weeds are where the food is. The game fish have a choice, breath or eat, but the DO remains too low for up to two weeks.

What’s the effect on big fish? It stunts growth their growth.

So, what’s the effect on big fish, going without enough food for two weeks? We don’t know for sure. We can guess it stunts growth, it stresses or weakens them, it may cause them to search for food in areas without enough oxygen, stressing them further or they may go to deep water and stop moving. The bigger the fish, the bigger the stress.

Remember when “studies” told us that hydrogenated oil, trans-fats, DDT, or drywall from China was safe? How about lead-based paint or asbestos? Think about that the next time you go fishing and wonder where all the big fish are.

Skip the herbicide and protect yourself from weeds with LakeMat lake bottom blanket!