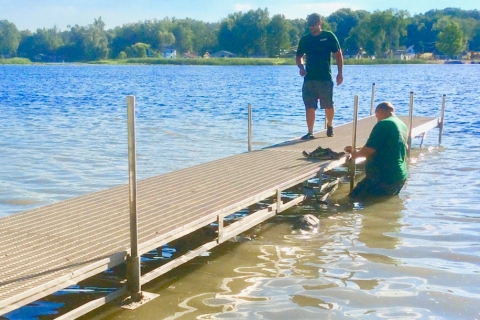 You may have noticed, chemicals used to treat lakes aren’t as effective as they once were. Wonder why? Two reasons. Some chemicals in aquatic herbicides were so toxic they were banned — 64 of them — so far.  The remaining herbicides are creating chemical-resistant “Super Weeds.” You probably know the overuse of antibiotics creates drug-resistant bacteria — “super-bugs” that don’t respond to treatment. The same thing happens in plants, repeatedly exposed to herbicides — especially aquatic weeds.

Herbicides will kill a certain percentage of lake weeds — 70 to 80 percent, if applied by professionals. Of the weeds that are left, some didn’t receive a high enough dose to kill them — but some weeds did get a high enough concentration, yet they didn’t die.

The lake weeds that live — are genetically more “resistant,” to the poison, (like some people don’t get poison ivy easily). When fall comes and lake weeds drop their seeds — the “resistant” lake weed seeds make up a higher percentage of next year’s weed crop. Season after season, the weeds become more resistant. Over time, higher concentrations of herbicides are needed to control them — increasing the toxicity to humans and wildlife. Each year chemicals become less effective.

Since Romans threw salt on the fields of their enemies so no crops could grow, people have been poisoning plants. Modern use of chemicals to treat lake weeds goes back to the nineteenth century when a mixture of copper and sulfur was used to treat algae in lakes and ornamental ponds. Use of aquatic herbicides in lakes took off in the late 1940’s with the development of 2 4-D… you know it as dandelion killer.

By the 1950s, the race was on to create more potent aquatic herbicides. By the 1970’s, hundreds of new herbicides and pesticides were being produced. Concern over the proliferation of so many new chemical compounds lead to the creation of the Environmental Protection Agency, to regulate them.

Uniform testing techniques found many aquatic herbicides were extremely toxic, not only to lake weeds, but to fish, animals and people as well. DDT was a very effective pesticide, but devastated wildlife, contaminated habitats and lingered in the environment for decades. Here’s a creepy fact — DDT was banned in in the United States in 1972, but production continued here, for use in other countries, until 1985. Widespread use and public concerns over environmental and human health issues prompted closer scrutiny of aquatic herbicides.