Why LakeMat is the Best! 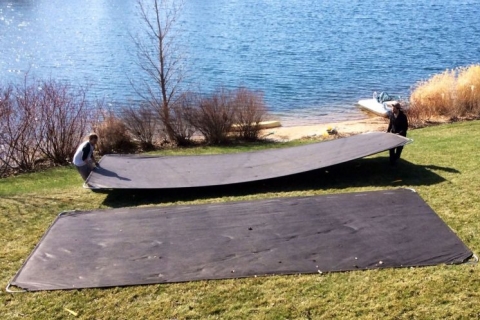 As the saying goes, there’s nothing new under the sun. This holds true for our LakeMat®. But all things aren’t created equal. And LakeMat® is superior to any similar product. Here’s why.

We seem to have four online competitors.

This product is a piece of sheeting (they don’t say what). That’s all it is! The instructions tell you to lay it in the water, then put rocks or other weights on top of it. What?!!

Then, if it gets gas bubbles (trust me, it “will” get gas bubbles) they suggest you “cut holes” in the fabric to let it out. What?!!!

They have an alternative weighting method, telling you to get long weights (like rebar) and (again?) “poke” holes (with a screwdriver?!!) to attach the weights.

Goodness sakes! I guess if you want to have a bunch of rocks in your swimming area and you keep a knife (or screwdriver) handy to cut holes in your mat, I guess this one’s for you.

Now this mat comes with no weights, so they tell you to go to your building supply store and buy nine pieces of rebar, have it cut to the right length, then go back and insert it into the mat yourself, before you put it in the lake.

Well, if you happen to have a building supply store around (the big box stores like Lowe’s usually won’t have it) and you can get them to cut it, and you don’t mind hauling nine pieces of 10-foot long rebar in your car, or fooling around (wear old gloves) with inserting it…this mat may be for you.

Here’s a tip: Before you buy the “custom cut” rebar, ask your “building supply store” just how much it will cost to buy and “cut” the steel. Be ready for sticker shock…

So if you have a vehicle that can haul something 12 feet long and you don’t mind carrying around 90 pounds, this could work for you. On the other hand, I can carry a LakeMat® with one arm and a 30-foot long LakeMat® fits in the front seat of my Saab!

Cheap, non-gas-permeable fabric, (tarp-like) a weird assembly system, no gas-release ports, can’t connect multiple mats, does NOTHING FOR MUCK. The worst of the worst. Yes, it’s cheap, but they know what it’s worth.

The LakeMat® is the only product that is made from patented, gas-permeable fabric that’s approved for underwater use by our State Department of Natural Resources.

And the winner is…LakeMat®, by a country mile!